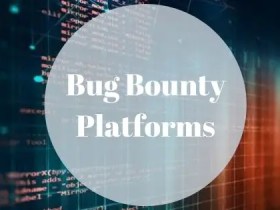 Bounty hunters have undoubtedly given rewards for their work since ancient times. But we live in the era of digitization, we often come across various websites that are vulnerable. They are prone to exploitation by black hat hackers. However, you can be one of the bug bounty hunters for a particular program. The following blog is a detailed explanation of what are bug bounty programs, a list of it and some rules to be followed.

Must Read: How To Check If Your Information Is Leaked On Internet?

What is a bug bounty program?

Basically it is a program that various companies offer to bounty hunters. You as a  bounty hunter must help in securing their website by providing various vulnerabilities reports. In return, you get some reward from these companies. You can search for various websites online which can give you a list of various programs. The list is as follows.

Moreover, you must follow a few sets of rules and regulations. You as hackers have the freedom to perform hacking but certain limitations do abide which is specified by the law.

Intel is one of the leading ventures in microprocessor manufacturing which is found in most of the computers today. It generally focuses on its hardware and its products. It is open for all other than minors. The vulnerability reports can not exist in the versions which are no longer being used or also which are yet to be released.

You can report the vulnerability at [email protected]

Cisco always welcomes any organization or networking individual who has a concern for security and vulnerability. It should be strictly belonging to the Cisco domain only. In case of mail, they’ll respond in at max 48 hours.

They have provided their emergency contact number and if the vulnerability doesn’t need to be reported immediately, then you can mail them at [email protected].

Apple provides extensive electronic devices, their services and also platforms for its application and functioning.

You can provide your reports to Apple based on its security scanning in-app, platform, services and hardware. But the vulnerabilities are to report on the publicly available versions only. Most of the bounty programs involve in data and device hijacking and stealing from iCloud. It also includes rewards for network and device attacks. You can include videos and detailed reports.

Apple allows you to report your vulnerabilities at  [email protected].

Google is a search engine that also provides other services like play store and is broadly used by almost every user a million times a day.

The security team at google welcomes the vulnerabilities which are predominantly in the field of google domains. This may or may not involve the third party application which makes use of it. Most of the reports are successfully considered only when they are involved in breaching the confidentiality and integrity of Google.

Google reports are welcome at  goo.gl/vulnz.

Paytm is an Indian payment transaction application. It can be linked to your bank account and can get attractive discounts and cashback while spending from that app.

Paytm pays out the rewarded monetary benefits only via Paytm. Although, you can report most of the in-scope vulnerabilities easily. While submitting the Paytm vulnerability reports, you need to upload all the necessary evidence in your own Google Drive link and then share the link in the section mentioned.

You can report them at https://bugbounty.paytm.com/#report.

It stands for, ‘Pretty Good Privacy’. PGP key helps in the encryption of data. Moreover, it also helps in authentication and secured data communication. PGP can help in protecting most of the data that transmits including texts, emails, excel, and images. However, this is not just it! Every bug bounty program has its own PGP that is useful to submit vulnerability.

Always check the valid vulnerabilities. Otherwise, you may lose the chance of bounty. Meanwhile, every bug bounty program comes with its own set.

Some common ones are: